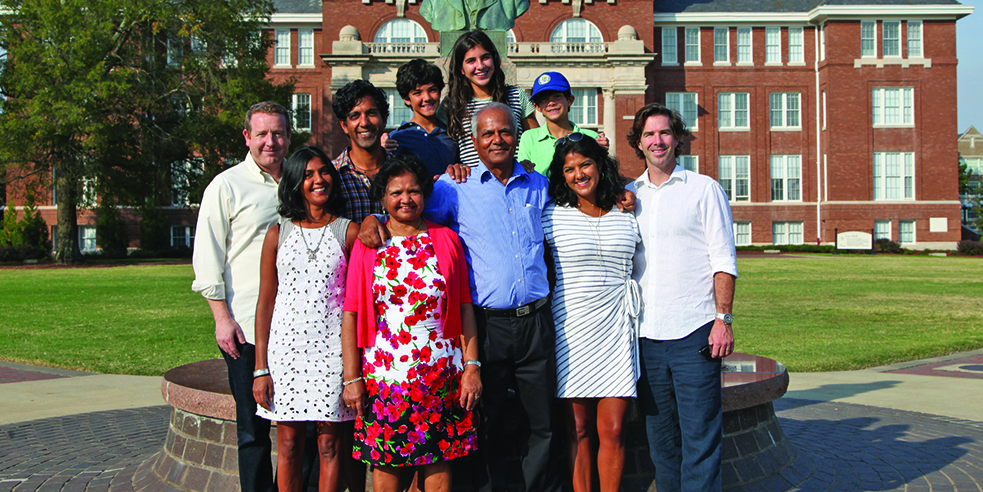 Many people may not remember the first time they set foot on their college campus. Was it for a campus visit as a high school student? Perhaps it was a summer orientation session. Maybe it was the day they moved into their dorm as a freshman.

But for Natwar “Nate” Patel, the story of his first day – well, night really – at Mississippi State is one of those indelible memories that he’ll never forget.

It was early January of 1969, and Patel had just flown halfway around the world from his home in Sola, a small town in the Indian state of Gujarat. He had chosen to study at Mississippi State based on its nuclear engineering curriculum and in part because he thought the campus looked nice in a brochure he had seen.

“We took a cab from the airport in Columbus after having spent all day flying,” Patel said. “I didn’t speak very good English at the time and the cab just dropped us off on campus in the middle of the night.”

Not only was it the middle of the night, it was the tail end of the winter break between semesters. Campus was essentially empty. He tried to get into a couple of buildings, only to find them locked. And it probably goes without saying that he didn’t know anyone in town.

“Thankfully, we ran across a campus security guard and he let us into an empty room so we could get some sleep,” he said.

Patel eventually settled into his own dorm room in Garner Hall and into the campus and Starkville communities. He was connected to a host family who treated him like one of their own. He spent holidays with them and learned to love chicken.

“I was amazed that a program like that existed but also very grateful,” Patel said. “It made my transition to campus and to the U.S. so much easier. Their support meant so much to me.”

Patel’s goal was to study nuclear engineering, and Mississippi State was one of only a small handful of colleges who offered the program at the time. Once on campus, he focused on his classes and worked a few hours a week as a research assistant for one of his professors to make a little extra money. Most of that work involved doing research in the library, and he earned about $7 per week –  about $45 per week in today’s money.

“Nuclear engineering was very challenging,” Patel said. “I didn’t go out much,” he added with a smile.

After graduating, he moved to Chicago but he faced a few additional challenges, not the least of which was the fact that he wasn’t an American citizen.

“When I graduated, most of the companies who hired nuclear engineers required U.S. citizenship,” Patel said. “I did some odd jobs to make ends meet. I was a baggage loader and a ticket agent at Trailways Bus Company in Chicago.”

But the hard work and his patience eventually paid off. In 1976, he was hired as an engineer at Abbott Laboratories and worked his way up to a manufacturing supervisor position. A few years later, he moved to research and development where he designed and modified a wide range of disposable intravenous medical devices. He also co-patented a non-PVC disposable IV device. All told, he spent 27 years with Abbott Laboratories.

Even though he would occasionally talk about his time at State, he hadn’t been back to campus in nearly 45 years. So, for his 70th birthday, his family planned a surprise trip for him. This past October, Patel and his wife Devi, along with their three children and three grandchildren, visited campus for a trip down memory lane.

Thankfully, this time there was no need to hail down a passing security guard. After a visit to the engineering buildings and a tour of campus – including a stop at the MAFES store to get some world-famous Mississippi State ice cream – Patel reflected on getting his start in Starkville.

“I really enjoyed my time here,” Patel said. “Campus has changed a lot but it’s still a beautiful place. I’m grateful for my time here. Mississippi State opened a lot of doors for me.”