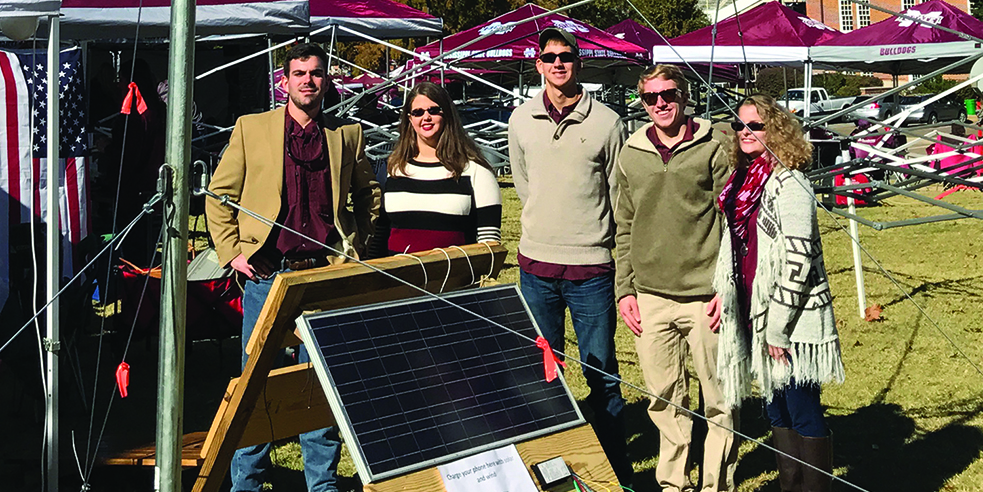 Take a walk through the Junction on any Mississippi State football Saturday, and you’re likely to notice the variety of sights and sounds associated with tailgating. Tents and grills are ubiquitous but you’ll soon likely notice the hum of countless generators as Bulldog fans seek to power everything from televisions to crock pots to fans.

At one football game this past fall, however, a group of Bagley College of Engineering students proved that you may one day be able to ditch that noisy gas-powered generator in favor of quieter, more environmentally friendly power sources.

“One of the goals of our chapter is to focus more on alternative energy sources,” said Jeff Steinwinder, a senior civil engineering student and vice president of Mississippi State’s chapter of the American Society of Civil Engineers. “It’s definitely an up-andcoming topic in the engineering field. As we talked about ways we could implement greener technologies, we came up with the idea of powering a tailgate with alternative energy.”

The group studied renewable power options within their budget and set up a 500-watt system that included a 15-foot tall wind turbine and a 4×2-foot solar panel before the Bulldogs’ November 19 game against Arkansas. The two generators charged a battery, which then fed electricity through an inverter to power lights, a phone charging station and a set of speakers.

The dual generator set-up proved to be ideal as the wind was more prevalent early in the day, while the sun came out from behind overcast skies later in the afternoon. The system charged 30 cell phones throughout the day, speakers for about six hours and lights for three hours after the sun went down. And during approximately eight hours of tailgating, the set up only experienced one drop in voltage.

Thanks to grants from Southern Company and the Mississippi Department of Environmental Quality, the ASCE chapter created their renewable energy tailgate for about $850. They also took advantage of green-certified lumber donated from a biosustainability project in Mississippi State’s forestry department.

“All of the equipment we used is commercially available,” Steinwinder said. “And it cost less than purchasing a new generator, which can run in the $1200 range.”

With football season in the rearview mirror, the group is continuing to study alternative power options in hopes of improving their tailgate set up for 2017 and beyond.

“For our first time setting up a system like this, I would say it was very successful,” Steinwinder said. “Hopefully we can set up for more than one game next year and continue to grow the project.”

And with any luck, thanks to their work, tailgating might just become greener – and maybe even a little bit quieter – in the future.